Growing old isn’t as bad as it seems… as long as your bank account is as mature as your age.

The lesson learned is to become rich. That was my biggest takeaway from an impromptu chat with a couple of OG/goodfellas outside of a steakhouse the other night. They were living the life, living the dream, and I wasn’t mad at them for one second. I wasn’t jealous of them either, which is odd these days, since envy is the second emotion to follow hate. The stories they shared allowed me to take a deep look at my life in the most superficial of matters and draw some conclusions about myself.

Cigars and brown liquor get most men chatting freely and those elements found me in the company of some 50+ year old gentlemen outside a restaurant. We chatted about the shitty NYC weather and moaned about the shitty Super Bowl. One of the fellas, we call him Freddy, mentioned that he was going to Florida the next day and told his buddy, Donny, he should fly down with him. And this is where it all started.

Sometimes in life you just want things to fall in your lap.

Guys over fifty like to tell stories. You’ve lived enough life to be able to relate everything back to a personal experience of yours. Freddy and Donny, being no different, went on to tell me about the last time they travelled down to Florida. I stood and listened and laughed as I heard how Donny bought rounds for everybody, how he kicked off his Louis Vuittons into the crowd to convince some girl to kick off her 6″ heels and dance with him, how Freddy fingerbanged a girl at the bar, how they bought a bunch of pissed-off dudes mad that their girls were sitting with these OGs at their table a round of drinks to ease the viscosity, and how Donny consumed 15 glasses of Scotch and somehow still managed to be coherent the next day. Mind you, each story element took 5 minutes to be told and was pantomimed out in excruciatingly vivid detail and every woman mentioned  had breasts out to here and ass out to there and a face like that. Who cares they casually referenced needing or using Viagra. Forget about the acknowledgement that the only reason they were living it up was because they bought EVERYONE drinks. They had a blast. And could care less what you thought of them prior to, during, or after the events of that night in Florida. They have thick skin made of $100 bills. Your commentary means nothing to them.

You, me, any guy could get a bunch of chicks to party with us, but it would require some degree of effort. Exerting effort isn’t always fun. Sometimes in life you just want things to fall in your lap. 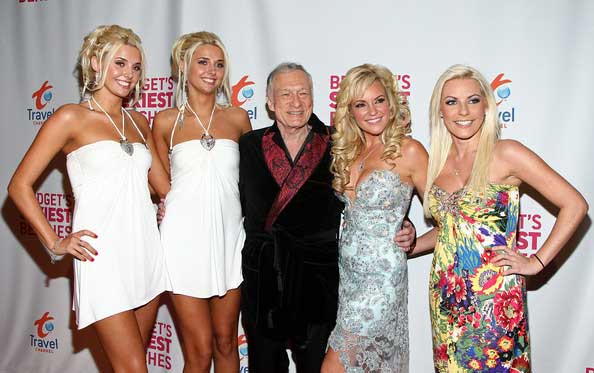 Hef The OG and King of Zero Fucks

Money can buy comfort, convenience, and protection. Apparently it can also buy societal insulation that is commonly referred to as Zero Fucks. This type of protection has spawned the culture of pajama rich. I want that protection! I need that in my life! Listen, I’m a secure man, but I’m human which means I have my insecurities, which I can successfully and unsuccessfully hide like we all do. But after chatting with Donny and Freddy, they taught me a valuable lesson – when you are a baller, he who has the ball wins – fuck the rules of the game cause you make the rules. Old. Overweight. Grey hair. Thinning Hair. Bad wardrobe. It don’t matter. What matters is that you buy a table with absurdly overpriced bottles of liquor for women who are broke and only interested in you because of your money and you have a grand time of it all at that moment. And not give a damn what anyone has to say about it. It’s a simple way of living that unfortunately requires a bank account that’s 0’d up for the most part or else you must face the gargoyles of society casting stones upon your house.

Now, if you don’t like my train of thought or this blog post, I’m old enough and secure enough not to give a fuck as well. Go live your dream. I’m gonna go live mine.

Go ahead and write a comment in the COMMENTS below and see if I care!