The Curious Case of Ines Helene

The Ballad of the Internets’ “It” Girls

Since the invention of the printing press, man (the male gender specifically) has looked to exalt women in the immediacy and immortalize them in prosperity. With the invention of the Internets, the gateway to the “it” girl was magazines, books, calendars, and posters gave way to verified Twitter accounts and Instagram #ThirstTraps, #WomenCrushWednesday and #TittyTuesday, as technology gave access previously unimaginable, and made the lust process more streamlined, seamless, and untethered. Similarly to the stock market, the commodity of women rise and fall depending upon a multitude of factors; despite this, without fail, there is always a woman du jour regardless the time or platform. Farrah Fawcett red bathing suit posters gave way to Darlene, Ice-T’s baby momma, gripping a shotgun in a white bathing suit more lethal than the weapon she was toting, giving way to Sports Illustrated models with calendars that were affixed to walls, garages, and lockers across the globe, that eventually took us to a period where video vixens was an actual occupation as music videos were consumed voraciously. The advent of social media, specifically Instagram, a new platform and market (and thus an economy) has emerged. I don’t even know if there is a term to define these girls, their backgrounds being somewhat diverse, but the mechanism to receive them is the same. Instagram model. Glamour model. Video hoe. Video vixen. Bartender. Bottle Service Girl. Waitress. Bartender. Startender. Student/Model. THOT. Stripper. Dancer. It goes on and on. The bottom-line is that they more often than not they end up on Instagram and are dubbed Instagram model since they typically put their booking information in their profile (booking what exactly is a hotly debated topic) helping to fuel the Instagram economy (a fascinating area to explore). And like all commodities, there is a rise and fall of actual and perceived value for girls. Quarterly, annually, semi-annually, there is usually a girl who breaks through the glut of cleavage, duck faces, and selfies that captures the collective thirst of men worldwide, and the cold world shade of jealous/envious/bitter women globally. [intense_blockquote color=”primary” font_color=”#ffffff” border_color=”#000000″ width=”100%”]As the Internets grew, women from pop culture were translated into bytes and men continued to pay homage with their keyboards and mice.[/intense_blockquote] 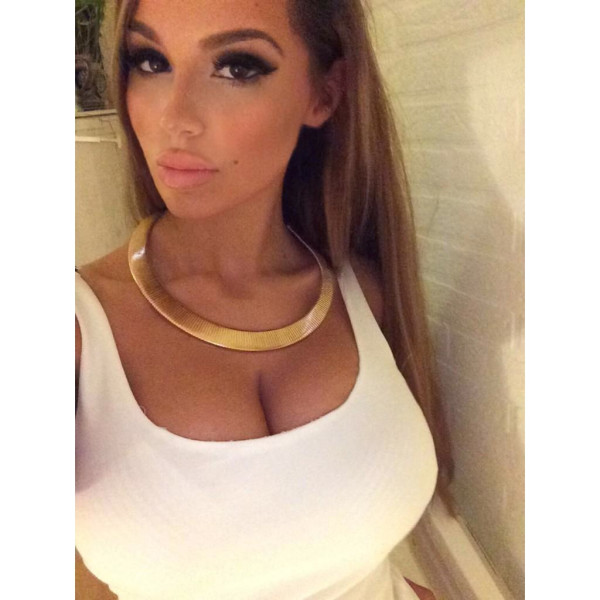 I can’t keep track of all of the girls, although I remember my first one during the age of Internets – Elvira (don’t judge me!). Can’t recall the year, but it had to be around Halloween, because the first time I was able to get online at home (shout out to AOL), I searched for Elvira, found a JPEG of her and printed it out… and that was it. It was like a butterfly in a collection. Men put in this work, to capture, to own this piece of beauty and make it a part of their collection. Elvira was my first Internet butterfly. As the Internets grew, women from pop culture were translated into bytes and men continued to pay homage with their keyboards and mice. You may not know or recall their names, but millions of Google search histories do – Denise Milani, Vida Guerra, Wendy Fiore, Melanie Iglesias, Coco, etc – as they all have lived in your browser, on your desktop, or hidden on a hard drive. In those moments, some have maximize the moment to capture more fame, a “real” career, some monetary gain or some semblance of financial security. Their stories are typically cut and paste. It’s safe to say that Ines Helene is that girl today, but her story reads more like a mystery than the typical satire we see with the narrative of the “it” girls. Ines’ tale is a mystery wrapped in an enigma. When I came across her astonishing (you really thought I was going to write asstonishing?) photos, I figured she was simply the latest one in a million.

Catfish the TV show has been on air for two season too long (reference the last three seasons of Jersey Shore for MTV’s propensity for this) and has graduated from UrbanDictionary to Oxford’s Dictionary. The show has placed a light on the reality that with the explosion of social media platforms, there are a plethora of ways that weirdos can dupe the unsuspecting into a tapestry of deceit. The Internets has (or at least should have) taught everyone not to believe everything you see online. Cue Ines Helene, the late 2014/early 2015 “it” girl. Take a moment to look at her Instagram if unfamiliar. You either say “Damn!” or “Goddamn!” She is Taarna from Heavy Metal, never mind Jessica Rabbit. The next obvious question the collective always asks is “is it real?”… and that’s where shit gets tricky. Is what real? The face? The boobs? Dat ass? Or the profile in and of itself? Hair. Makeup. Lighting. Digital cameras. Photoshop. Apps. Angles. All of these are tools in the tool belt of today’s woman. That’s a given, but there is a segment of the online population that create fembot android online simulations for whatever reasons. A lot of people, myself included wondered if Ines Helene was real or a catfish. Welcome to the reality of internet “it” girls. 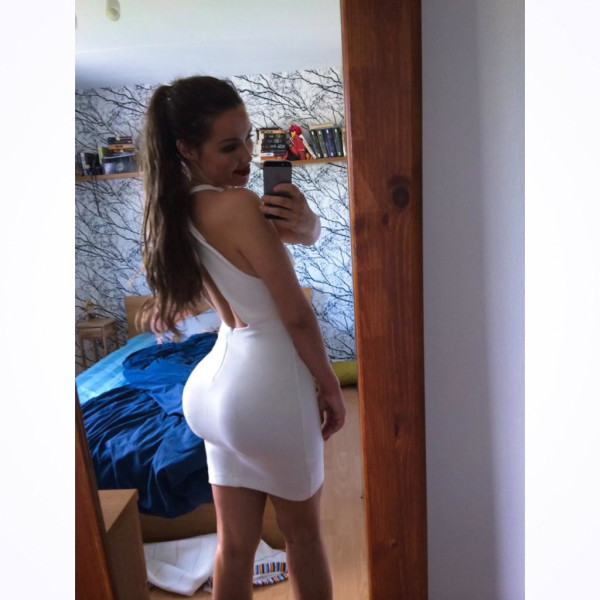 Things just didn’t add up with Ines Helene. Perhaps it was her iPhone 1, since her pics were of suspect quality. Maybe because there were never any other people in her photos. Maybe it’s the lack of videos. 98% of her photos were selfies and she seemed trapped in her bedroom. It was weird. Her life didn’t mirror the life we’re grown accustomed to seeing on Instagram, which doesn’t make you a black sheep, it makes you a potential catfish. Regardless, her notoriety grew along with her follower count. As of today’s writing, she is at 397K (when we first discovered her, she was at 30K). The Super-Id determined that she was worthy of a post and post we did on who we dubbed the Swedish Unicorn. Apparently the girl Googles herself and saw our post and liked it it enough to screenshot and post on her IG. We only one course of action from there – SLIDE UP IN THE DMs!

The Internets eats people daily. When you start ranking on Google Trends, what are you to do? You are loved, lusted, and loathed simultaneously as you have left an impression on the masses and the result is a mob of folk intent on exacting a pound of flesh. And everyone is clawing at Ines Helene’s ample backside. You go from being to a brand. The only thing more enjoyable than witnessing someone’s ascension is their fall as everyone chews them up and spits them out on the way down and out. Once discarded and replaced by the new new, what is a girl to do? No one cares about the swan song of the internet “it” girl. How long before Ines Helene is a footnote in our search history? We’ve seen this story before a million times. The Kim Kardashians. The Amber Roses. The Melyssa Fords. The Vida Guerrars. They come and go and we move on to the next one. This is what they do and that is what we do.

Back to issue at hand – Ines Helene, the woman we dubbed The Swedish Unicorn. We were able to make a connection with her and establish a digital relationship. We video Skyped for over two hours with her [Editor’s Note: The Ines Helene will be posted shortly]. She posted our logo on her IG. She followed us and proceeded to spam our account with likes. The Internets teaches you that there is always a surprise when shit seems to good to be true – where is that other shoe? Her is a surprise – Ines is a sweet girl. She is conscious of her notoriety, but amused by the absurdity of it all. And that’s the sad and strange thing about this all – it’s all absurd. I understand wars have been waged over women, but we’re just talking about a woman. No slighting Ines, but it’s just a hot chick online. What’s the big deal? Let’s look past our cynicism and recognize the other shoe is simply a pretty girl who’s captured our attention as we speculate if she can make a career being a pretty girl. It’s not the first time it’s happened, and it won’t certainly be the last, but because it’s the Internet, we are quick to dismiss everything as being virtual and not a reflection of real life. We’ve made her an idol. 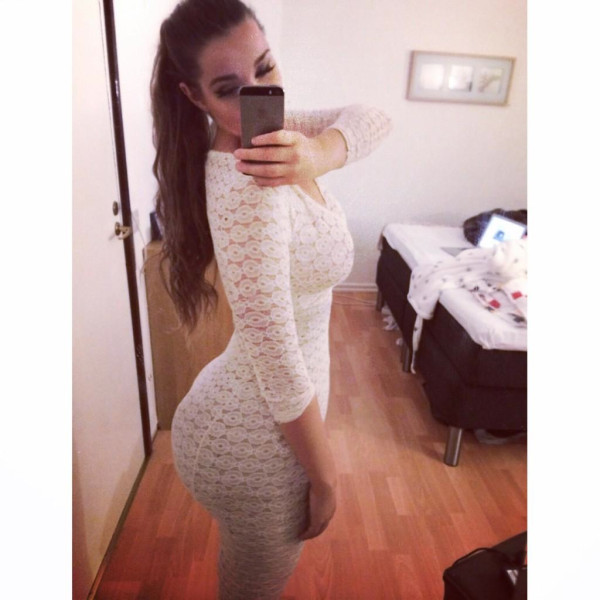 In Neil Gaiman’s American Gods, the old gods are waging a war against society’s new gods – media, technology, and celebrity. They are what we believe in today. They are what we hold onto tight. They are what is real to us. And you look at Ines Helene and ask “is it real?”, the answer is a yes. We’ve made her real. She is a new god, because we’ve given her power through our attention, worship, and belief. And what more do we want in life, but a story to believe in. Why do we pick up books, watch TV shows or movies? We always have an idea of how things are going to end, but we want to go along for the ride. We enjoy it. With that, let’s ride out with Ines Helene and see where she and the Ines Helene brand takes us.