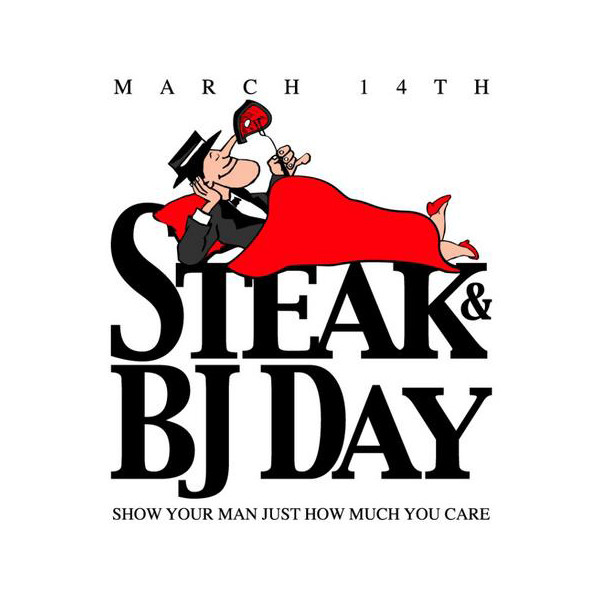 It’s impossible to intelligently discuss the plight of the male gender without coming off as one of those Fox News assholes who are always bitching about something that even remotely threatens rich, old white men, but I’m going to try.

Being a man is rough these days. Let me count the ways:

A step further, look at what the Internet and social media has done to change the norms and ways of mankind for man. 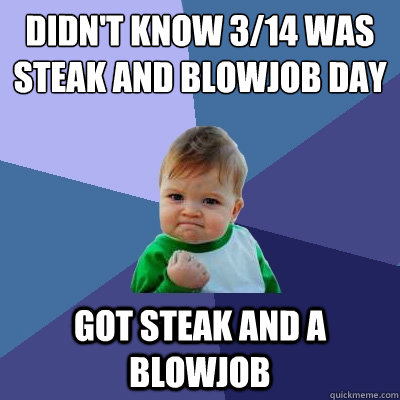 If It’s A Meme, You Know It’s Real

Valentine’s Day has always been a land mine for men. A commercially driven holiday dedicated to women. From November to February, the strain and drain on a man is enormous. Thanksgiving where men would trade away that turkey for the opportunity to sit and watch football all day without interruption. December brings the Season’s Greetings holiday where days prior are filled with work and overtime in order to earn more money to purchase gifts for loved one and to gift the hosts of the events you are dragged to by your significant other. New Year’s Eve? New Year’s Day? New expenses. New headaches. And then Valentine’s Day, a commercially constructed holiday for the sole benefit of women. Red hearts. Chocolates. Cards. Do these sound like items high on a man’s Amazon wish list? With the coming of spring in March, man now finally has a reprieve. It’s a holiday that most are ignorant to, but is nonetheless as important as National Pancake Day (I see you IHOP), or Pizza Day or Black Friday or Cyber Monday. We’re talking about Steak and Blow Job Day. Don’t laugh. We’re dead-ass serious. And you know we’re celebrating the hell out of this day.

Men simply want to feel special. We want to feel appreciated. We don’t want no cards, chocolate, flowers, gifts… unless of course they’re serve with a steak and a blow job.

He dropped it so matter-of-factly, I didn’t notice at first. I had to stop him mid-sentence and mid-cut as this was more important than the haircut he was giving me, and asked him to repeat what he just said. “Steak and blow Job Day.” The way my barber said it, I furrowed my eyebrows, because clearly I should know what exactly he is talking about, but Captain Caveman had me clueless. “What is Steak And Blow job Day?” I asked. A stupid question deserves a stupid answer. “A day where men get a steak and a blow job.” Duh. That was my duh moment. “When is Steak and Blow Job Day?” [Please note: there is no way to or no reason for abbreviating Steak and Blow Job Day. No Xmas or Turkey Day or V-Day. You have to call it by its full and proper title, Steak and Blow Job Day. If caught in an untenable situation, you are allowed to roll with Steak and Blow Day, but that may get people confused with this.]

“March 14th? That’s random.” It was only later than I put 1+4 together. Everyone knows February 14th – women’s second Christmas or extra birthday. March being deplete of a real holiday [Sorry, Kiss Me I’m Irish Folk, St. Patty’s does not count.] needed something. Something for a monthly continuation of major US holidays, but just as importantly, men needed something. Men need love too! Shit!

I discovered Steak and Blow Job Day through one-of-my-now former flames.  My girl (at the time) asked me to come by her place after work. She insisted. I remembered it was a Thursday. March 14th. I got to her place around 9pm. When she opened the door, I recognized the aroma coming from the kitchen – roast pork, my favorite. I also noticed that from head to toes she was on point. After kissing her, she asked me to go take a shower and I obliged. She had laid down a towel and a robe for me. She had always made me feel special in the past, but for some reason that night I was feeling extra appreciated. After feasting on my meal, she took me into her bedroom, pushed me on my back on the bed, and she proceed to bless me with one of the most memorable blow jobs ever. When I thanked her for it, she said, “I will do it as long as it’s important to you.”

After years of been under appreciated, a visionary by the name of Tom Birdsey, a disc jockey from Boston took lead and decided to change the status quo when he created Steak and Blow Job Day. More than anything, Steak and Blow Job Day is men’s movement, and while the mainstream has yet to recognize as a national holiday [Editor’s Note: It will never be a recognized holiday since Hallmark or whatever e-card company is popular now can’t monetize it since men don’t want cards. They want steaks and blow jobs.] it’s as powerful as any idea who’s time has come, but looking beyond the protein intake and output, there’s a cry for attention and appreciation. Men simply want to feel special. We want to feel appreciated. We don’t want no cards, chocolate, flowers, gifts… unless of course they’re serve with a steak and a blow job. We aren’t demanding, but are kindly asking for our respective steak and blow job.

When a woman wears red lipstick or any shade for that matter, she is unconsciously telling men, “My mouth is opened for whatever.” And as a natural reflex, we feel the need to oblige. March 14th, fondly known to men-in-the-know and women-who-are-great-sports as Steak and Blow Job Day, is one month after Valentine’s Day for a reason. Valentine’s Day is a holiday created purely for the purpose of showing a prospect or current lover the depth of a suitor’s appreciation, either with cards, flowers, chocolate, jewelry, dinner, or any grand gesture of that testament. While Valentine’s Day is greatly advertised, Steak and Blow Job Day has yet to become mainstream. Whether it’s because of the controversy that comes with the name, it nevertheless is telling women that us men also want to feel special. Yes, we want a blow job! While the steak can be substituted for anything, like beer, bourbon, whisky… the blow job is non-negotiable. Again, we want a blow job! [Editor’s Note: Don’t forget the steak!]

If this amorous, yet savage testimony doesn’t convince you that Steak And Blow Job Day is real and your man deserves his, maybe these commandments of truth as deemed by pop culture and the Internets will convince you: 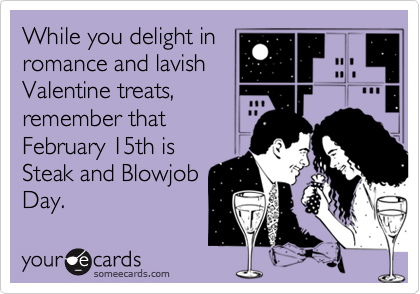 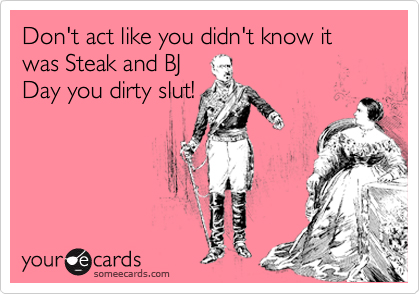 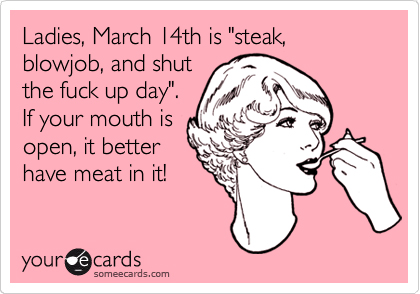 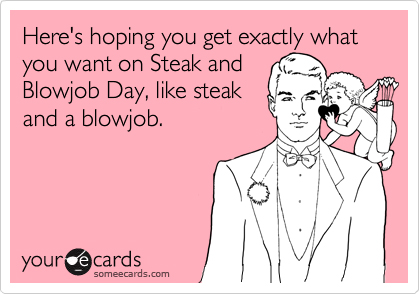 St. Valentine’s is speaking to me… 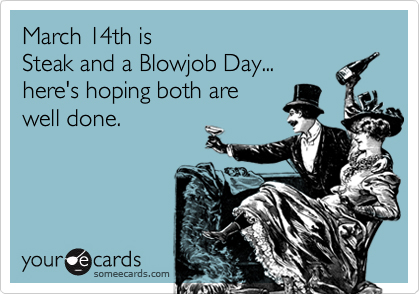 Some men will settle for medium well… depending. 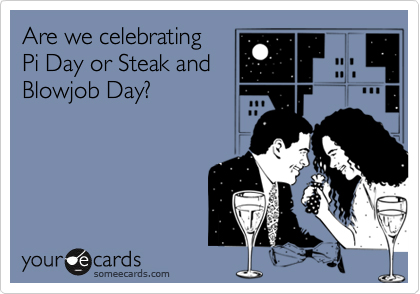 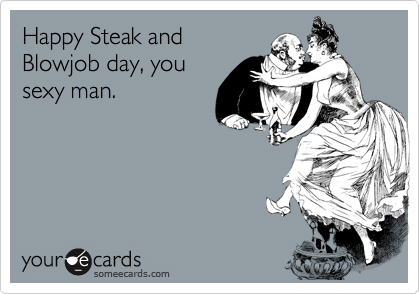 I love my bish… 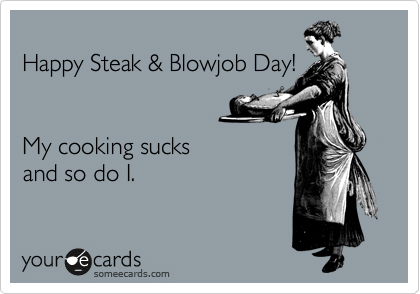 Who doesn’t love a secure woman? 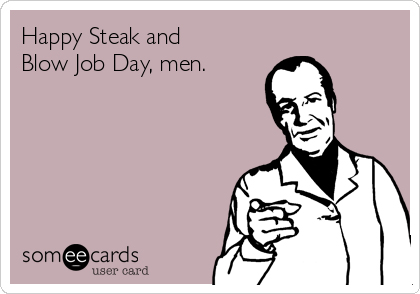 Thank you. And the same to you, friend! 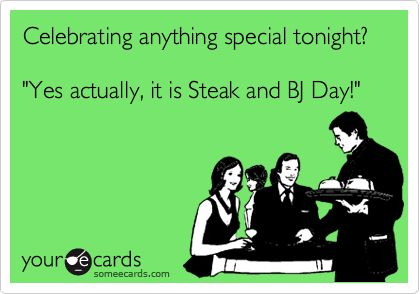 It only comes once a year… 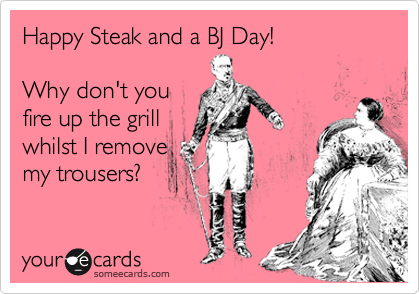 Why don’t you enjoy it while you’re at it? 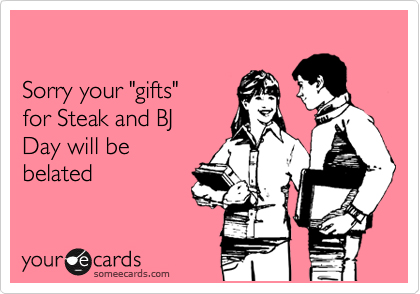 It’s the thought that counts… but we still want those gifts!

Look at for the meeting invite coming up…

[Editor’s Note – we polled several women and asked them if they were aware of the holiday. Most weren’t. When asked if they found offense to the notion of a day dedicated to meat and oral sex, a common reply was “isn’t everyday?”]