The internets is filled with stuff, so much stuff it seems like a job just to keep up with it all. Here at Super-Id, we like to keep it simple – one thing, whether it’s a photo, video, song, or whatever, they we think you should fucks with. We call it
Today’s… 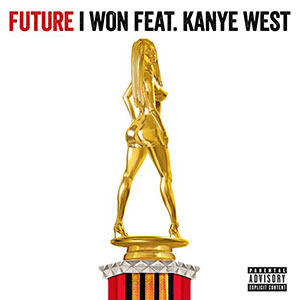 It’s hard to come to grips with any song that Future makes. We live in a society that shunned T-Pain. T-Pain! Why? Cause all he used was auto-tuned and after Jay Z dropped D.O.A. (Death of Auto-Tune) it was a wrap for the rappa ternt sanga. And I liked T-Pain. He made happy music that I could dance to. You ever drive in the left lane doing 20 over the speed limit while listening to a T-Pain record? You felt like you were in the shower having a blast. I like happy music. Anyway… Future is the 2000s T-Pain and he gets a pass. Whycome?

Here’s the funny thing… I like Future. I can’t name any of his songs, but I’m pretty certain I know those hooks. And hooks are the way to pop/top 40 stardom. If you can get people using your hook as a catchphrase and yell it all day and hashtag all the time and sing it all nite, you’ll have a hit. Future’s I Won is not a hit. I know I won’t be using it as a catchphrase, or yelling it all day, and definitely not hashtagging it, nor will I be singing this shit. It sucks. And Kanye on it adds to the suckitude since damn near everything Kanye puts out sucks in some kinda way. It’s too easy to blame Kim Kardashian for this, but we will blame Kim Kardashian for this. So maybe we should blame Ciara for Future’s failings. Maybe her aura of fallen off-ness has infected Future.

Quiet as kept, this is a simp, sucka anthem. I blame Instagram and the #thirsttrap for dudes openly discussing women as trophies.

As if this shit couldn’t get worse. Kanye West and his bullshit bars.

You the number one trophy wifeSo it’s only right to live the trophy lifeYou grew up on J. Lo, Timberlands by Manolo nowTill one day I put an angel in your ultra soundI want to dip that ass in gold, I want to dip that ass in goldI made it over NBA, NFL playersSo every time I score it’s like the Super BowlBaby, we should hit the south of FranceSo you could run around without them pantsI put that glacier on your little handNow that’s the only thing without a tanMy trophy on that Bound bike, I gave you only pipeIf people don’t hate then it won’t be rightYou could look at Kylie, Kendall, Kourtney and KhloeAll your Mama ever made was trophies, right?

I understand (actually I don’t) everyone is obsessed with Kim Kardashian and Yeezus, but if you allow this song to hit heavy rotation on the airwaves, I will never forgive you. Not only are you co-signing simping, but you’re putting shitty music in heavy rotation… and we already have enough of that. Future, Kanye West, and you should be ashamed of yourselves. And I am too for posting this, but I’m in the game for page views (joking… kinda).

Does this song have a future? Let us know in the COMMENTS.