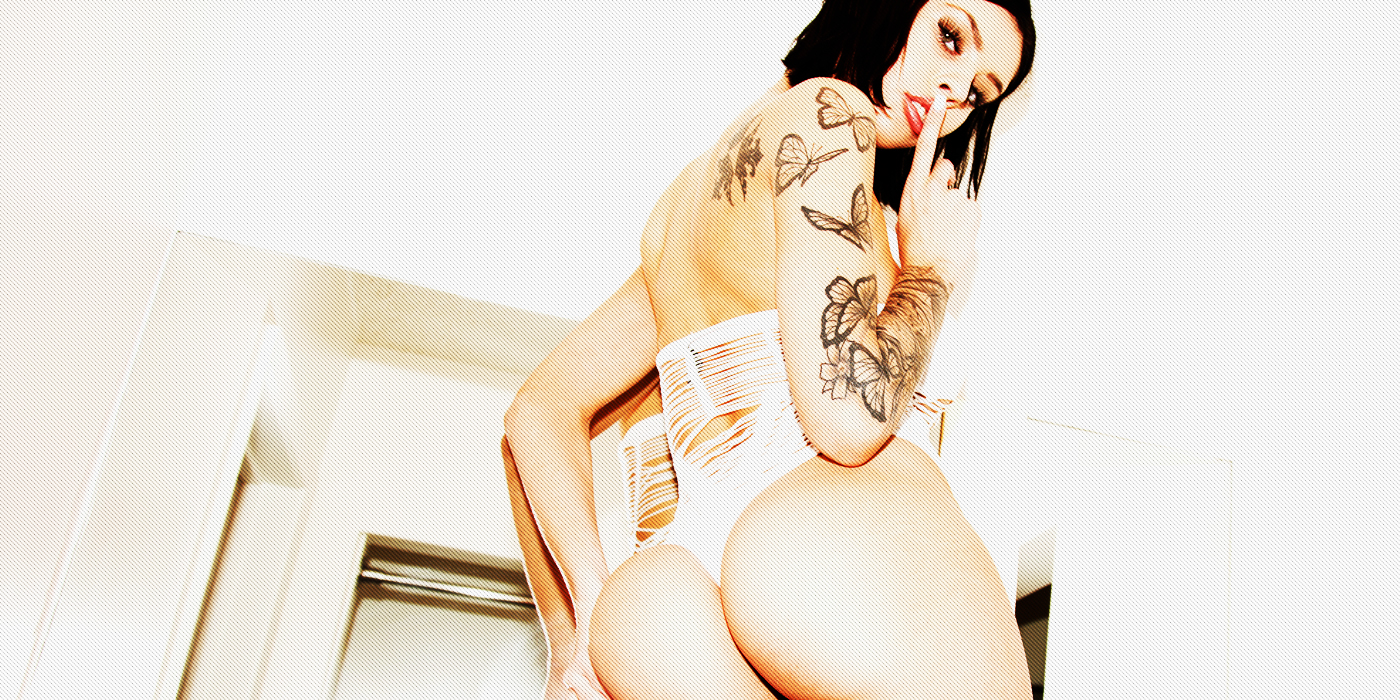 Morgan Hultgren is Swedish Killer. We’re pretty sure she is Swedish and I’m 10000% positive that she’s actually a killer. Morgan Hultgren is the reigning queen of the fucking Instagram #ThirstTrap. She’s got big fake tits and an amazing real ass and is not afraid to torture her almost 2 million followers with her goodies daily.

Morgan/Swedish Killer is the most famous model we here at Angrymoon have shot. We hit her up on IG during our LA tour a few months back and to our shock she responded to our DM [Editor’s Note: Both Angrymoon and The Super-Id’s respective IG DM slide-up game is strong as fuck, you suckers!]. There was a bit of a back and forth and then we got Inked Magazine involved in the deal. Inked had interest because Swedish Killer… duh.

Prior to the shoot we were in communication with Morgan and was discussing outfits and vibe for the shoot. We were a bit short on clothes and a tad bit nervous because we wanted this shit to be just right… it’s Swedish Killer after all. After explaining our concerns to Morgan she replied “I figured I’d be naked the whole time anyway.” That is Morgan Hultgren. That is the essence of Swedish Killer. That is her vibe. She is unapologetically fem, very sexy and can wield that shit like a weapon. We get it, we respect it and even fear it a little.

Stick around for Part II of the Angrymoon.net shoot with Morgan Hultgren, the Swedish Killer.

[Editor’s Note: It started with a text. Angrymoon communicates 95% of the time via text (phone calls are for emergencies only). Can’t recall the particulars, but the crux of the conversation was asking if we were familiar with Swedish Killer, because the AM team was about to shoot her. The answer was yes, we were familiar with Swedish Killer and wow. We asked if they were okay, and the reply was that Swedish Killer was nuts. This was alarming. For the unaware, Angrymoon operates in a different sphere than the rest of humanity and for them to say someone is bonkers is bonkers in and of itself. We were concerned. She has ‘Killer’ in her name, and from what we know Swedes seem to be some of the nicest people on the planet. Was she a killer of Swedes or a killer who happened to be Swedish? Either way it was all very concerning. We were troubled (but not troubled enough to actually call AngryMoon; this was still via text).

Throughout the nite we would get random texts with updates of what was transpiring in the hotel room. The adventurous, happy-go-lucky, fuck-it side of us was wishing to Yeezus we were there. The side of us that values our mental health, safety, and having a decent night of sleep was grateful we were across the country.

Just like Angrymoon said, stick around for Part II of the Angrymoon.net shoot with Morgan Hultgren, the Swedish Killer to not only see the rest of the gallery, but to find out how the rest of the nite went down.]